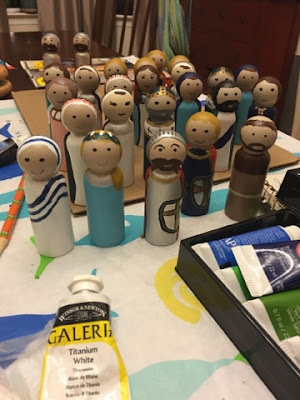 Here's my group of finished saints. I painted them to be used as rewards for my CCD class. In the past my motivation for the students were treats but now that allergies are so common and the fact that kids just don't need any more junk to eat I needed a new option. Back in February I thought of a new idea. I began painting peg people for fun. So after telling my class what I planned I finally finished my part of the bargain. I made 50 peg people. About 35 were saints. I lost others to the littles who wanted to paint their own people and I made a few other dolls for personal use. Those are still in process and will likely get worked on again in the winter when our activities slow down.

I began by asking the students what saints they felt were meaningful to them. It was that little list that got me started building the project.

I made many Mother Teresa dolls, none of the children mentioned her but I find her to be such a great one to learn about, not to mention that she is going to be Canonized September 4. This one will be a hit I think. Plus she was such a joy to paint.

I painted several these : Saint Michael the Archangel, Saint Francis of Assisi, Nicholas, and Saint Patrick. These were the top choices I kept getting from the students.

After that I didn't know where to go. I wanted to paint all sorts of saints but some looked to be too tricky for this novice painter. That's when I began looking through my Saint books to get ideas. My plan was to paint at least two of each saint to allow for more variety and I assumed a few kids would want to have the same one as a friend. However, that was not possible. I ended up painting only one of some saints. Mostly because that's how it turned out. A few were me trying to correct some mishaps. Others were the result of not keeping a good count and realizing I was running low on wooden pegs. I enjoyed discovering the various ways to represent Mary the Blessed Virgin. She was so much fun to paint. I made a list of other ideas for later. Her variations will be a great addition.

Here's my list of Saints:
Michael the Archangel
Patrick of Ireland
Francis of Assisi
Mother Teresa
Lucy/Lucia of Syracuse
Barbara of Nicomedia
Catherine of Alexandria
Nicholas of Myra
George of England
Rose of Lima
Philomena of Rome
Kateri Tekakwitha
Joseph husband of Mary
Mark the Evangelist
Helena of Constantinople
Mary the Blessed Virgin
Our Lady of Guadalupe (Mary)
Stella Maris, Our Lady Star of the Sea (Mary)